Panic in an uncertain future 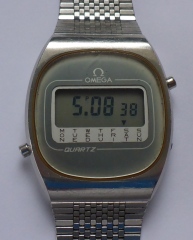 In the middle seventies, the traditional Swiss watchmakers saw their one hundred or so years of dominance threatened by quartz technology that came in two forms and from two directions, analogue from Japan and digital from the USA.

Seiko was first with the analogue Astron, launched in the last 6 days of the seventh decade of the 20th century(25th December 1969). The Hamilton Watch Company released the first LED digital in 1972. Both these releases where available for about the price of a small car. Prices soon began to tumble, but the shortcomings of the LED meant that the LCD (Liquid crystal display)  took control and several serious watchmakers, not knowing where this new technology was headed, decided to play safe and follow what seemed to be the trend.

This example, from 1978 is quite basic. Omega trumpeted that the “Omega Quartz Digital: Style, precision, reliability” I agree with the latter two comments, but I don’t agree that it contributes much to style. It was also quite basic, having only day and date function, in addition the full time display, and a light to illuminate the screen.

Omega also claimed that the Omega Quartz Digital “is one of the most technologically advanced watches in the world”. I also disagree with this claim. In 1978, Seiko, and others, already had more ad

vanced digitals with features such as chronograph, alarm, countdown functions as well as being programmed for leap years.

Let us have no doubt that quartz digital technology was a giant leap forward. Quartz was to mechanical watches what light bulbs were to candles. It’s not surprising that Omega executives thought that the digital was to be embraced for the future. Facts were, quartz digital technology offered stunning and unprecedented accuracy, reliability, had no moving parts, it can feature a multitude of functions and it was cutting edge technology.  It was a logical business decision to go in that direction. 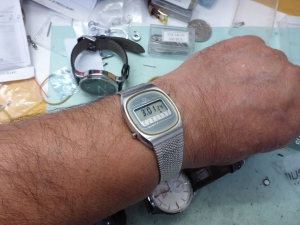 They were wrong! Over the next few years, LCD prices dropped and the digital watch cheapened in both price and image. By the mid-eighties just about every big watchmaker had dropped all digitals from their respective ranges.

Back to this watch; while most digitals focused on the sports watch market, this one is more on the dressy side. Being only 8mm thick it sits very nicely on the wrist and has a fine stainless steel mesh bracelet. It is water resistant to 30m and has only three buttons. It is signed four times; dial, module, inside the back and the clasp. Missing is a medallion on the case back as you would find on almost all Omegas of era, this back is completely plain. 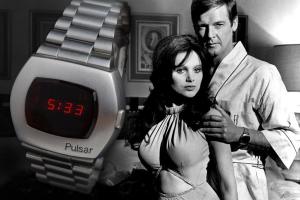 This Omega Digital watch is an important icon in horological history.

I’m a horoligical “petrol head”! I love classical mechanical watches, not because they tell me the time, I can get the time from cheap quartz watches, my computer, phone, microwave or just about anywhere. I’m interested in the movements of watches, the aesthetics of case design and their construction, the history and the simple thrill of watching tiny, beautifully finished wheels, pinions and other parts turning and oscillating and marvelling at the craftsmanship that created it.
View all posts by robswatches →
This entry was posted in Digital, Omega and tagged 70's watch, Classic watch, Digital Watch, LCD, Omega. Bookmark the permalink.

This site uses Akismet to reduce spam. Learn how your comment data is processed.